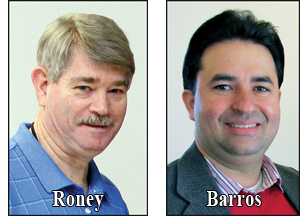 James was born in San Benito, Texas and saved at an early age. His family moved around a lot, but considered Houston his hometown. During his junior year of high school he went to live with his father and step-mother in Gainesville, Florida. That is the year he got actively involved in an ABA church. Upon graduation from high school, James wanted to be a pediatrician, but God was calling him into music and youth work. He surrendered to that call and attended Texas Baptist Institute & Seminary. James and his wife Cathy have been married forty years this coming November and have two married adult children and five grandchildren.

James has served as Minister of Music and Youth at several churches in Texas and Florida. He has also been a Substance Abuse Counselor for 20 years.

Brother Roney will be teaching Bible Psychology, Logic and Bible Counseling at TBI.

Francisco is from Fortaleza, Brazil. He, along with his wife Camilla, came to the United States in November, 2014 to study at Texas Baptist Institute & Seminary.
Francisco is pursuing his Bachelor of Theology Degree at TBI. While studying at TBI, he is also a Ph.D. student in Classics (Greek Language and Literature) at University of São Paulo.
Francisco was an instructor of Ancient Greek Language at the University of São Paulo.

Brother Barros will be teaching Intermediate and Advanced Greek at TBI.